by Moi Moi Fine Jewellery on April 29, 2020 in Engagement Ring

For centuries, diamonds have symbolised love, commitment, marriage, and all the in-betweens, but have you ever wondered where the tradition of giving an engagement ring as a betrothal gift (and why it has to be a diamond) even came from? Buckle up for a quick history lesson! 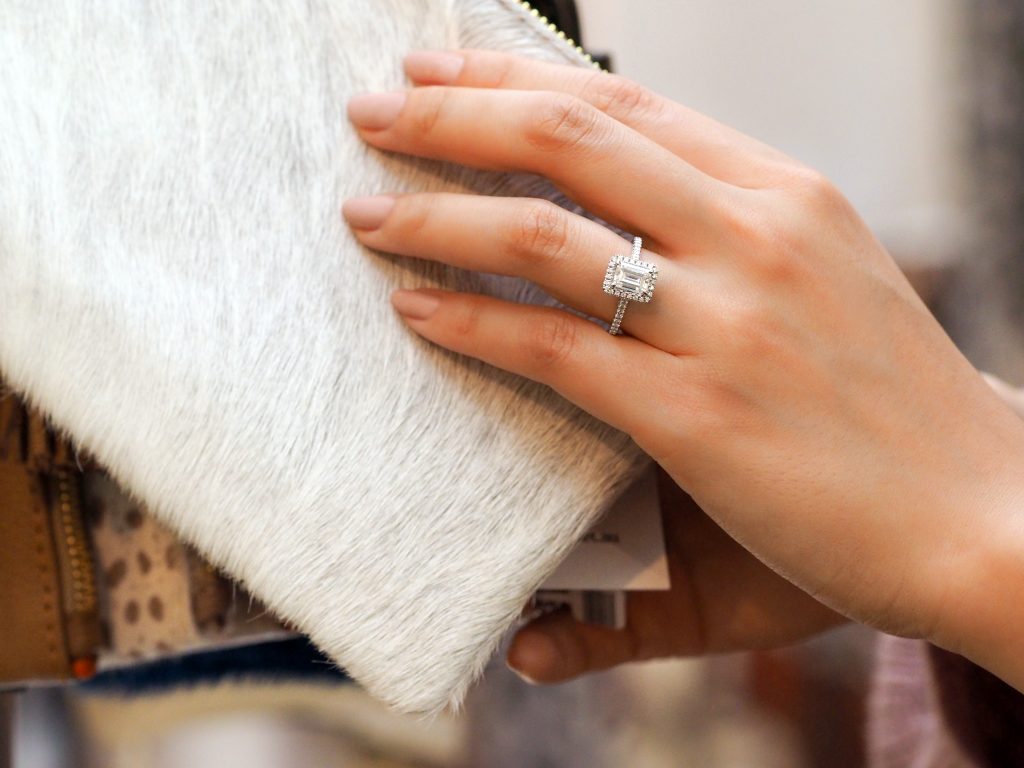 Earliest traditions of “ownership” and love

It was said that Roman women back in the days wore rings of ivory, flint, bone, copper and iron to signify a business contract or to affirm mutual love and obedience (It wasn’t exactly the most romantic nor empowering reason, but thank goodness intentions have evolved this day). The women were commonly given two rings on their wedding day–one in gold to display their status in public, and another in iron for everyday wear at home. Quite similarly, Egyptians were also said to be exchanging woven reed or leather rings as tokens of their affection, drawing on the shape of the band to represent “eternal life and love.”

How did diamonds enter the picture?

Diamond engagement rings didn’t come into play until 1477, when Austria’s Archduke Maximillian presented his fiancé, Mary of Burgundy, with a gold band with diamonds in the shape of an “M” in honor of their engagement. This is widely seen as the model for all future engagement rings when others in the royal court were influenced to do the same. As the wealthy travelled, the tradition of engagement rings quickly spread around Europe. In the centuries after the Archduke chose a diamond for his bride-to-be, engagement rings also evolved repeatedly.

Evolving styles of engagement rings in the Victorian Era

Faceted gemstones and detailed metalwork were in demand in the 1700s and early 1800s, creating the vintage style adored by many of us today. Queen Victoria’s 63-year reign from 1876 to 1901 set several trends: from making the bride’s birthstone as an engagement ring, to choosing darker gems like black onyx and jet to create a bolder statement; and in the late Victorian era, solitaire engagement rings and the use of platinum became popular.  This is probably because as the culture of marriage, solitaire rings or plain bands were given as dowries to secure an engagement in the Victorian times. It’s also interesting to note that this is where the tradition of wearing a ring on the right hand and transferring it to the left during a wedding ceremony originated from.

The Victorian era also marked the discovery of diamond mines, and along with the industrial revolution, this created a perfect setting for upscale jewellery production. Diamonds were first found in South Africa in 1866 and soon after, the diamond output exceeded 1 million carats per year.

Post-War Collapse…until we learned that ‘Diamonds Are Forever’

There was a decline of engagements, weddings and diamonds purchased after the First World War, and with the Great Depression. It was quickly revived especially after the advertising campaign’s slogan “A Diamond is Forever”. By the early 1940s, engagement rings were leading lines of jewellery in department stores around the world.

Engagement rings in the post-war time had a similar purpose to the dowries in the Victorian Era. However, some things did evolve, like putting more power in the hands of women. Did you know that women in the UK could actually sue men for breaking off a marriage? That lasted until the 70s under the Breach of Promise, but women could still change their mind without penalty.

Turn of the century changes: Lab-grown diamonds and Custom made rings

Since the turn of the century, the culture of engagement has evolved significantly, partly because of the recent reforms of marriage laws. Generally, most marriages are now made more possible out of love and attraction rather than arranged. Engagements have become more personalized and engagement rings have truly become the symbol of a couple’s relationship. As a result, many couples choose to customize or design one that speaks volumes about their style and story.

People are now also more mindful of the origins of their centre stones and often opt for ethically sourced options. To avoid purchasing exploited origin, more and more couples now choose lab-grown diamonds or other alternative stones that are not only ethical, sustainable but also more fitting for the wedding budget.

Did you enjoy this story? Learn more about engagement rings from us! Talk to us online!

What are you looking for?

WELCOME BACK SALE STARTS 1ST JUNE, UP TO 30% OFF Dismiss